I haven’t really shared a lot about what we are doing in the gardens of the property where we live (for clarity: it’s not our property, but we live here and manage the land, which is probably just under an acre in a residential neighborhood, adjacent to downtown.) The soil is very poor on the property, and the lot to the west of the house used to be another property where the house burned down. In an attempt to begin the bioremediation process, sunflowers were scattered the year before we arrived here, and hugelkulture type beds with a plastic liner underneath were also built. On the main lot, more hugelkulture style beds were built on contour, and a few apple trees were planted in various spots along. That’s basically what we have been working with in the just slightly over a year that we have been living here. We’ve planted lots of trees (loquat, mulberry, pomegranate, fig, American persimmon and elderberry, among others), added in lots of perennials, some edible, some medicinal, some for chop and drop fertilizer or mulch, and some for pollinators. All of them have been planted for the deep roots to stabilize the woodchip filled hugels, and start to break them down into soil. Last year, we grew a LOT of collards, kale, arugula, mizuna, and some daikons, as well as lots of lettuce. We are trying to do that again, but with larger and healthier plants and also more of them. We’d also like to have success with more daikons, radishes, carrots, and beets, as well as the kitchen garden herbs that do well now, and a few other specialty items. It’s been such a long and hot summer, that it is hard to remember that the last few months have been so hard for keeping a garden alive, much less thriving! So, I went out to get some perspective on what IS going well for us right now, and to share it with you:

Purple Hyacinth Bean. These are providing color well past many other flowering plants, and are also giving pollinators continued access to a variety of food! Additionally, these are a nitrogen fixer and you can eat the young beans if you want (we’ve made a meal or two with them- they aren’t my favorite bean to eat, but in a pinch they are there). They can thrive in a range of poor soils, are drought tolerant and so easy to care for. All in all, these are a wonderful addition to a garden.

I need to learn more about this plant- I was told it was a moon flower, but it is not a Datura, and also doesn’t appear to be a morning glory type vining moonflower. It’s super tall, is producing lots of these beautiful white blossoms right now, though. 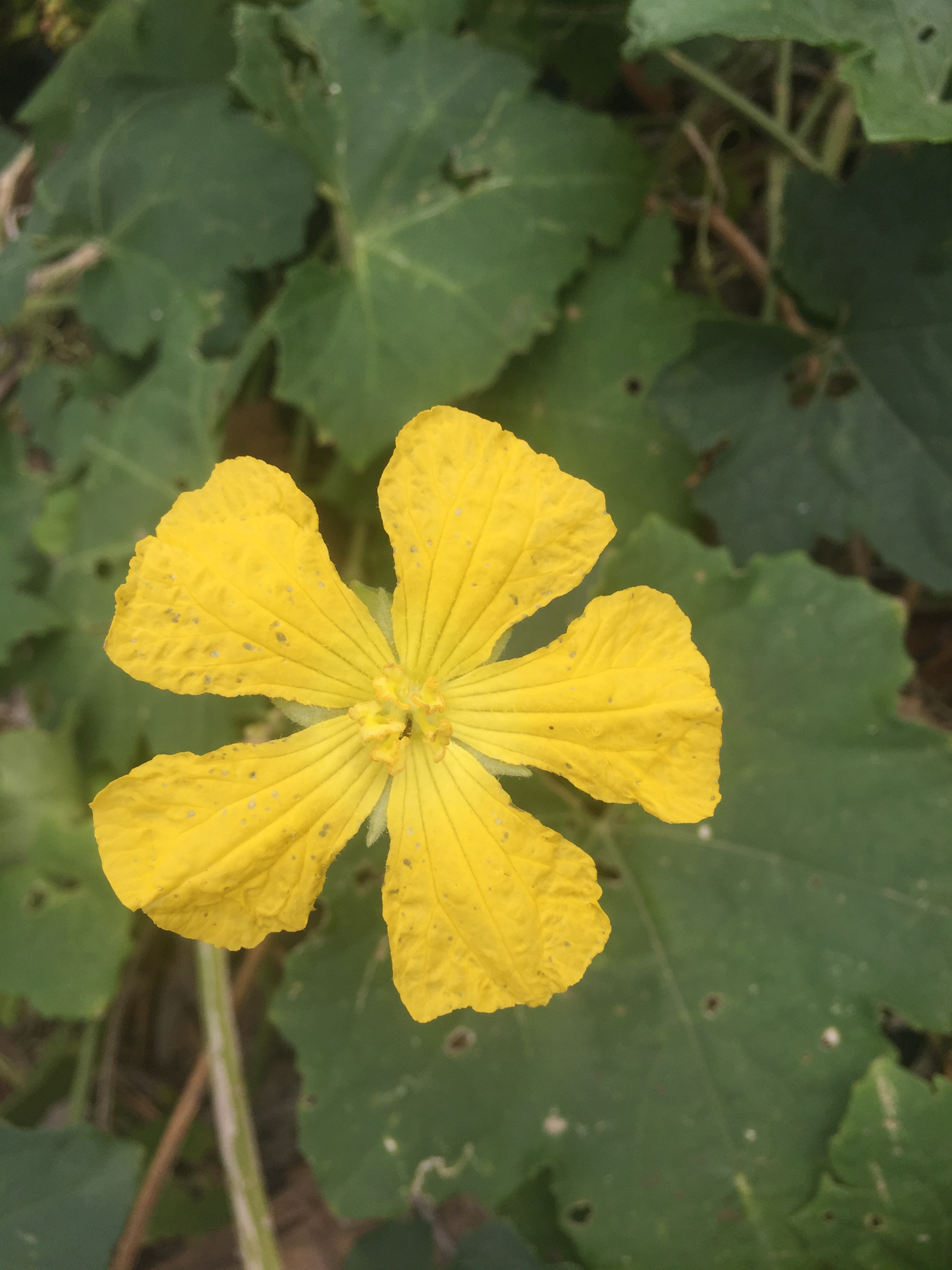 Luffa! I planted tons of seeds this year, had a vine that went absolutely insane but wasn’t producing fruit, I chopped it back to nothing and now it is blooming again and producing fruits! So funny. 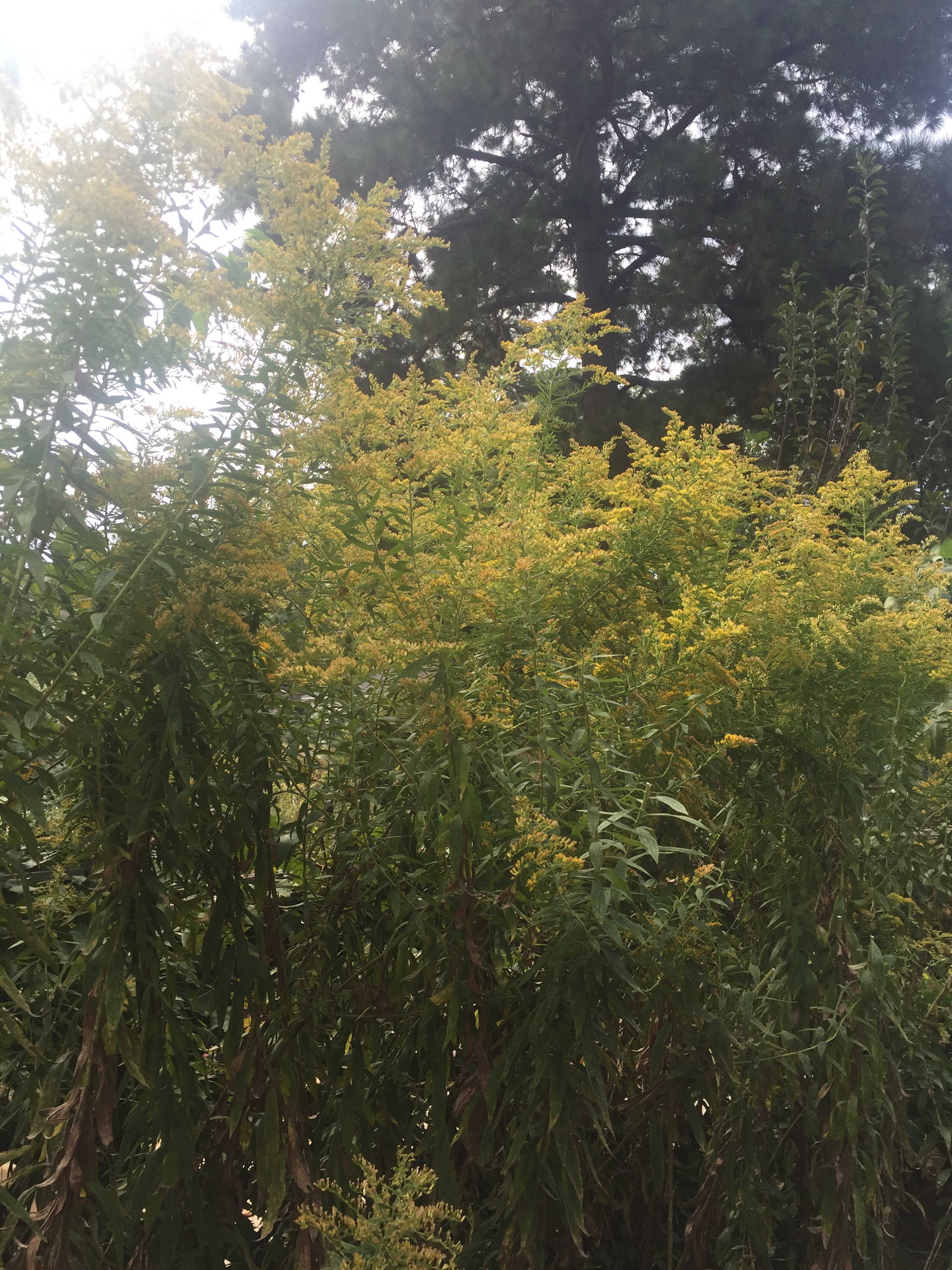 Goldenrod abounding. See my last post for a little more on what I do with Goldenrod.

Mexican Petunias. This is one of the flowers my mother has always always grown, and that her mother grew as well. They are just an ornamental garden staple in the South, provide more nectar for pollinators (specifically butterflies and hummingbirds) and are a perennial that adds character to the garden.

Root Beer Plant (Yerba Santa) with some Galangal next to it. Yerba Santa is so tasty as a tea, and I love to make a fresh cup when I am feeling under the weather. It has safrole in it, just like sassafras does, so it has a similar root beer flavor. The galangal is a cousin of ginger, like turmeric (we are growing all three this year), and we use it in teas and cooking just like we would ginger.

Tulsi basil doing great. I’m so happy this little patch volunteered, because the main Tulsi patch has long since gone to seed. I can still harvest off this patch for a little while longer and have fresh teas. Because we were in England when the other plants were at their peak, we didn’t get to harvest a ton to dry for tea this year. That’s ok, we enjoyed it as did the bees and I still have some that I dried earlier this summer, and lots of tincture. So, we are good!

Kumquats- one of a few kumquats here- this one is the oldest and most prolific, despite being in a pot. Although there are some in ground citrus, we lost a few in the freeze last year and want to be able to overwinter them indoors for now. I’ve been munching on a handful of these each day.

Another tree from our micro citrus orchard! This one is a satsuma that Dan got me for a Christmas gift last year, and this year it has some fruit.

Scorpion Pepper! This is one of the probably 10 varieties of peppers that are doing awesome right now. Also fruiting heavily are orange habaneros, red bellpeppers (though small), cayenne, tabasco, fish, and a few others that I don’t know the variety. We overwintered some last year, and had crazy harvests earlier in the summer. Those have petered out now, but we will definitely be overwintering some this year, too. 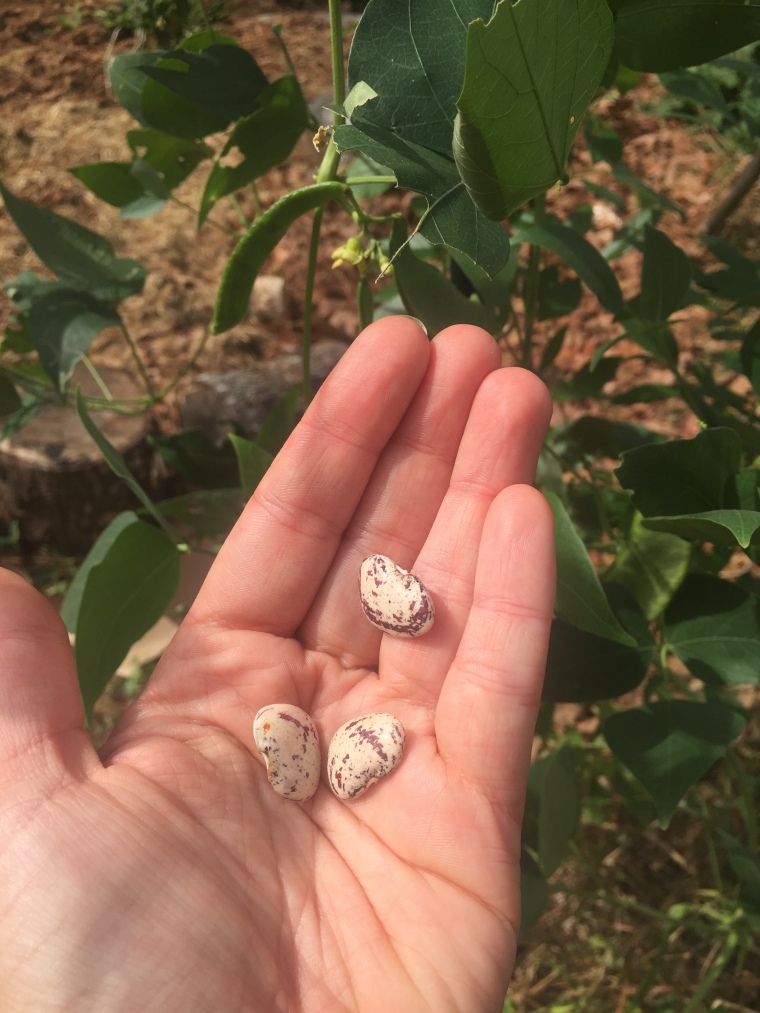 I do not know the type of bean that this is! Anyone? But I do know that it is the only bean that is flowering and fruiting right now! I have probably a cup of dried beans saved- I think I will plant them next year.

Comfrey. With some Galangal in the back.

Closer shot of the Galangal. Okra in the back, and leaf ring behind that.

Oh this hugel! I really, really need to dig some roots. I’ll use some to make medicine with, and replant the crowns again. Just in this frame, there is comfrey, horseradish, elecampane, and more galangal. There’s also some green tomatoes that need harvesting today!

This is a new kind of post, as I haven’t shared much of our garden adventures. I’d like to share more, as this was a small fraction of what we have growing. There’s also some projects I would like to tell you about and also document for ourselves. As this is not our forever property, I’d like to have a record of what worked well for us when so that we can recreate our successess and minimize our issues.  What do you think? Want to read more about permaculture gardening in Northwest Louisiana?