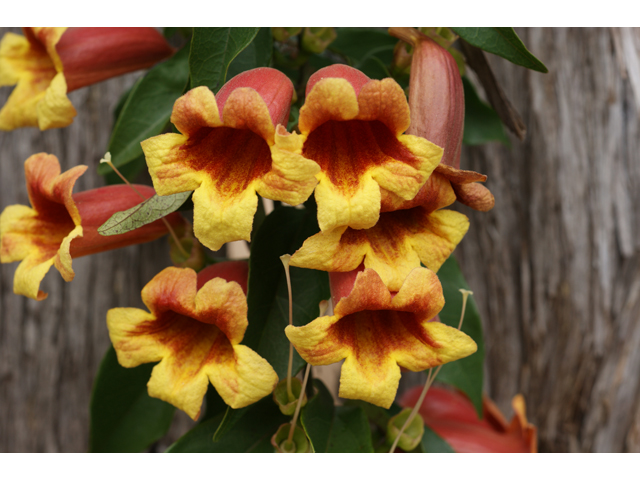 I want to talk about one of my favorite wild plants, Crossvine. Crossvine (Bignonia capreolata) is a perennial native vine that is common in forests of the Southeast. Crossvine is also sometimes grown as a garden ornamental because it has incredibly gorgeous trumpet shaped orange and yellow showy flowers that hummingbirds love. It flowers in early spring, when most other plants have not begun to bloom, and is one of the first sources of nectar for ruby throated hummingbirds as they journey back into the area. Crossvine is preferred forage for the swamp rabbit and is also eaten by white tailed deer.

It is a member of a largely tropical family of plants that includes Catalpa, trumpet creeper and Paulownia or Empress Tree. Crossvine has leaves that are semi evergreen and opposite, compound with 2 leaflets appearing as 4 leaves per node. Oblong, lanceolate with rounded bases. The leaves are smooth and hairless. There are branched tendrils for twining and clinging between leaflets.

There is a long documented history of use as a medicinal herb, although it is not usually included in the materia medica of modern herbalists (even those from the southeastern US). Native American usage of Crossvine was passed to slaves, but largely fell out of use as modern medicine popularized and traditional herbal remedies fell out of favor. The leaf was used by the Cherokee as a blood purifier or alterative herb; the Koasati used the leaf for rheumatism and the bark was also used in baths a a remedy for headaches.

Crossvine was brought back into use by Alabama Appalachian folk herbalist Tommie Bass. I first learned about Tommie Bass’s use of crossvine for mules worked to exhaustion and as an adaptogen from Darryl Patton, who himself learned from Tommie Bass. The only other reference in popular herbalism that I have found is from Matthew Wood in The Earthwise Herbal: New World, where he references both Darryl Patton and Tommy Bass.

Chemically, crossvine is interesting. It seems to contain an indole alkaloid (reserpine) which was previously thought only to be found in another plant family. The small studies that have been done on crossvine seem to show that yes, crossvine does have an effect on human physiology, but that most likely it isn’t down to the effects of that one alkaloid (surprise!) 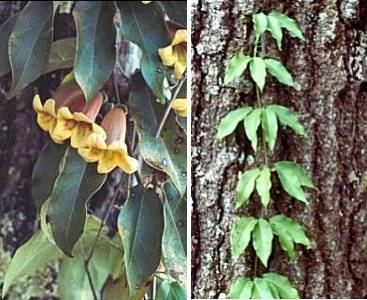 Crossvine is drunk as a tea. Traditional usage is 3 leaves per cup as an adaptogenic herb for fatigue and exhaustion. It was also used by Tommy Bass together with pippissewa as a “renal rejuvenative”

I find crossvine to have a very mild and ever so slightly sweet green flavor. Crossvine is intended to be used over the course of time, and people say that after a week or so of drinking crossvine tea, they find that they feel less worn out and tired than before. My favorite blend to make with crossvine is combined with goldenrod and nettles for when allergy season is in full swing. I react to our juniper species here in northwest Louisiana, Eastern Red Cedar, and find this blend to be helpful to mitigate some of the symptoms, as well as the general tired malaise that comes from a histamine response in the body.

The only possible look alike I can think of comes from the same plant family, trumpet creeper (Campsis radicans), but the leaves are really quite different. Compare the leaf in the two photos: 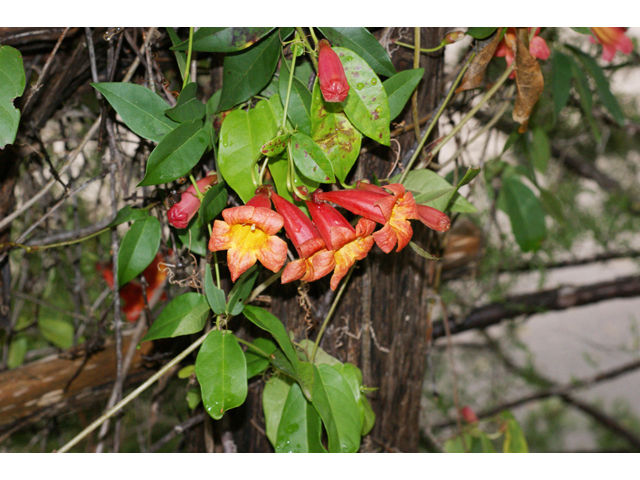 With the crossvine above, leaves are opposite and pinnately compound. The leaves have a branched tendril between them. When they are growing on a tree, it can appear that there is a cluster of four leaves (see second photo above). Also, the blooms generally appear mid March to June.

Trumpet creeper have leaves that are pinnately compound, with 4 to 6 pairs of leaflets and a terminal leaf. This means that the leaf is a lot more complex looking than that of crossvine. Also, trumpet creeper generally begins to bloom when crossvine goes to seed.

All photos thanks to wildflower.org

One thought on “Crossvine: Native Medicinal for Rejuvenation”